How boring. How vague. How run of the mill and almost status quo sounding…

Not in my world…

Before joining Resourcive, several of our employees served as Special Operators in various branches of the United States Military. Although being humble is engrained in our culture, being an Operator is the antithesis of generic and status quo. We study. We train. We practice. We communicate. We plan. We execute. At the highest level in the most austere conditions… we execute. Because we have to and we want to.

In the various teams there are individual creeds and ethos, but there is one overarching set that SEALs, Rangers, PJs and everyone in between can recite. In Special Operations Command (SOCOM), there are five fundamental truths that are the lynchpin of all Special Operations Forces (SOF):

Nothing vague about that.

Now, why am I talking about this? Why have I decided to blog about SOF of all things? The world is full of cool-guy stuff, from David Goggins’ insane Instagram to Jocko Willink’s podcast and countless other forums. Well, Resourcive works extensively in Private Equity, and after hundreds of calls and thousands of hours, I have found some unique synchronicities between the Operators I used to work with and the Operators I work with today. 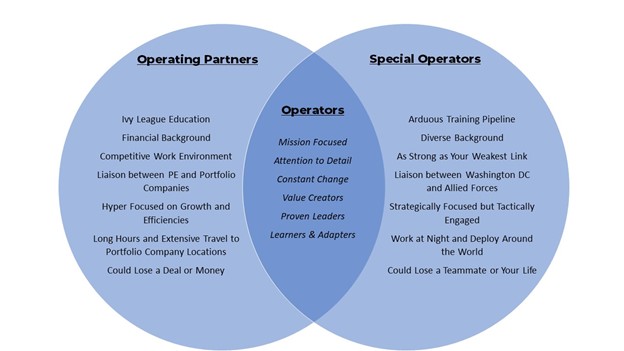 If a Venn-Diagram doesn’t do it for you, you’ve come to the wrong blog.

There’s no getting around the backgrounds of the various Operators being substantially different. Many times, Operating Partners (OP) have been Executive Officers or high-level consultants, which from a business acumen sense, far outweighs the Special Operator (SO). That said, what Special Operators may lack in business experience, they more than make up for with their mental fortitude, proactive problem solving, and stress tested decision-making abilities (they have to – there are life or death repercussions, you know).

Private Equity and SOCOM Forces both operate in purposefully intense and ambiguous environments; and, although both groups make the news on headlines such as taxes or terrorist raids, most of the work happens behind the scenes with little fanfare. Countless hours of honing skills in formal schooling and in the field is what separates both sets of Operators from their peers. Furthermore, both groups are relied upon by a larger team and are expected to perform at the highest level for strategic success. Both Operators are deployed to their unique Areas of Operation to create an impact, realize value (that may look a little different depending on the mission) and ultimately win. The juxtaposition was never more clear than during one of my first sit downs with a large PE firm in 2018.

I was in New York City, sitting across from a guy my age who is an OP at a large, middle-market fund. The back and forth started dry, as many of these start out. To the OP, I’m just another sales person trying to sell services into his fund:

Me – “Operating Partner, huh? What’s that day to day like? I was an Operator in my past life.”

OP – “Busy. I travel a lot and I’m always putting out fires, but it’s fulfilling work. What did you operate (with a smirk)?”

Me – “I was in the special boat teams, a SWCC in Naval Special Warfare. We operate in small, dynamic teams in collaboration with Navy SEALs and other SOF units. A little different from telecommunication consulting, but interestingly, you and I are probably more similar than you’d think.”

OP – “Wow. Wasn’t expecting that. So, you are probably used to the travel I’m lamenting…”

*Now we had something in common and now was my chance to capitalize.*

Me – {chuckles} “Yea. Overseas 10 times in 4 ½ years. But there’s more to it than that. I joined Resourcive because I saw a like mindedness in our target market… You PE guys are different. You are mission focused, hyper-analytical, proactive problem solvers and you are used to a grueling operational tempo. So are your portfolio companies.”

Me – “I know firms throw a lot at their CFOs and CIOs and we want to be an augment to your operations team. We support C-levels to drive efficiencies and savings, leveraging innovative tech to empower growth, which aligns naturally with an OP’s objectives in PE, wouldn’t you say?”

OP – “Absolutely, man. Human capital, top-line growth and driving efficiencies is my life. Who else do you work with? This sounds like it could be valuable.”

It’s All About the Culture: Do Your Job

Private Equity specializes in identifying emerging growth opportunities and uncovering value in distressed assets. Historically speaking, PE owned distressed assets outperform public counterparts, largely due to the PE owners being involved in the turnaround. To lead this effort, PE firms leverage OPs to lead improvement efforts, establish a growth plan, find and place formidable leadership and oversee the culture change necessary to transform into a winning company. Operating Partners must get close to these companies, understand their people, speak their business language, discover what is working, and more importantly, what is inhibiting the team form achieving success. The overall goal of the OP is to work themselves out of a job, by finding executives who align with the firm’s vision and can achieve the desired growth trajectory via organic growth or M&A activities.

Similarly, the United States and our allies, rely on SOF to play a comparable role by strategically placing teams around the globe to train and develop host nation forces. One group in particular, US Army Special Forces (commonly known as Green Berets), specialize in Unconventional Warfare (UW). Along with UW, the Green Berets are experts in Foreign Internal Defense (FID). FID isn’t what you see on recruiting videos and may not look flashy or sexy, but it is the lifeblood of SOF, and the Green Berets set the standard. These Operators have six months to land in country, develop trust with host nation forces, train, man and equip large groups despite language and cultural barriers. The end goal is the same for Green Berets as it is for the OP: Get the host nation forces self-sufficient and able to operate at a high level on their own. The work conducted during a FID deployment is paramount to the broader success of our military. When host nations can operate and defend themselves, larger and permanent military presence is less needed, especially during peace time.

Ask our President, Kyle Hall, if he was always welcomed with open arms when he landed in Afghanistan. Same with the PE OP when he/she enters a company coming out of bankruptcy who is hemorrhaging money and the employees are fearful for their jobs. No one said this stuff was easy, but both sets of Operators thrive in these environments. It’s what makes us different. We can’t afford to fail.

Operating Partners or Special Operators - difficult jobs? Damn right… neither is easy no matter which world you are operating. That’s why everyone doesn’t do it. Deploying into various cultures and, sometimes hostile environments, getting a lay of the land and ultimately shaping the go forward strategy – not always an easy task.

At the end of the day, no one cares how hard the job is or how difficult the atmosphere may be. Both Operators signed up to take on challenges that many people shy away from. Hence, when I sit down in DC, LA, Boston, or over Zoom, we can commiserate over like challenges, but the conversation always ends the same way: We have to get it done and it’s got to be done right. 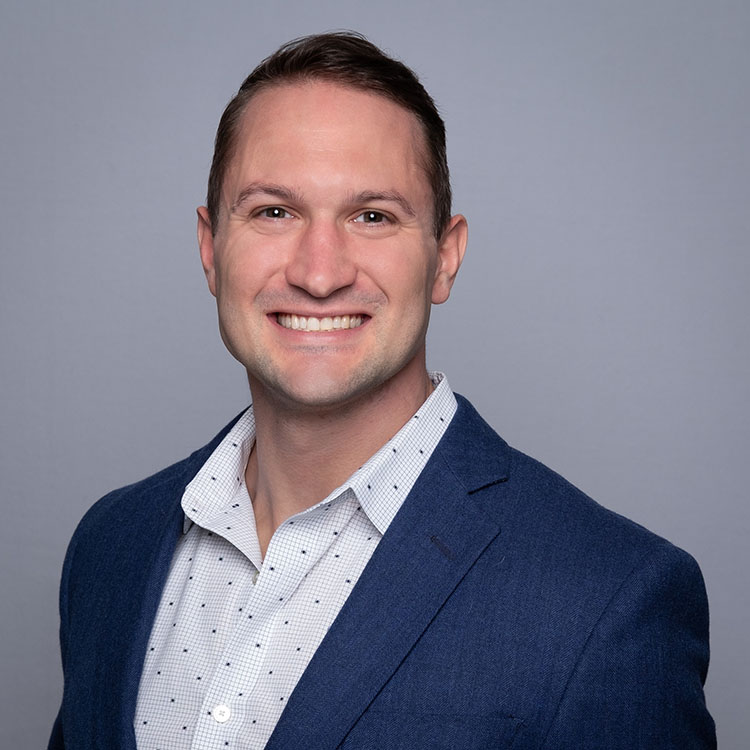 Nick leads our business development team and strategic partnerships with the largest private equity funds in the world.

Prior to Resourcive, Nick served 6 years in the United States Navy as a Special Warfare Combatant-Craft Crewman (SWCC)